The annual ‘World’s Ugliest Dog’ contest has announced its winner for 2022, in a competition designed to "celebrate the imperfections that make all dogs special and unique".

Held as part of the Sonoma-Marin Fair at Petaluma, in the US state of California, the World’s Ugliest Dog contest has been annual event for almost 50 years. However, the COVID-19 pandemic forced the cancellation of the event in 2020 and 2021.

“The annual World’s Ugliest Dog® Contest is not about making fun of ‘ugly’ dogs, but having fun with some wonderful characters and showing the world that these dogs are really beautiful,” the event stated on its website.

“Dogs of all breeds and sizes have warmed our hearts and filled our lives with unconditional love.

“While fun and entertaining, the contest speaks to the importance of advocating for the adoration of all animals and the benefits of adopting. Many of the contestant dogs have been rescued from shelters and puppy mills, to find loving homes in the hands of those willing to adopt.”

The contest’s winner was Mr Happy Face (pictured, main), an elderly dog who was adopted in August last year from a shelter in the US state of Arizona.

Rescued from abuse and neglect, Mr Happy Face has a series of health conditions and had been in care for quite some time.

Despite being warned that his age and health meant adopting him would equate to hospice or palliative care, with a life expectancy of just a few weeks, he melted his new owner’s heart.

Almost a year later, and Mr Happy Face has been world-famous having won the contest for 2022.

“Mr Happy Face was born into our family at the age of 17 years old,” his new owner said as part of his entry.

“When I arrived at the shelter, I asked to see a particular dog that, fortunately for me, had just been adopted. I asked if there were any other dogs that were similar to that one. There was in fact, another dog there who was much older and had health issues and I was warned could be inbred because he was so ugly.

“The shelter staff tried to prepare me for what I was about to see. I saw a creature who was indeed old, needed a second chance and deserved to be loved.

“When I first met him, he was the happiest creature that I had ever met. He hobbled up to me and chose me. I vowed that day, he would be so loved that he would never remember how awful his previous life had been.”

Other rescue dogs show looks, age no barrier to love

Second place was taken out by Wild Thang, who was left deformed after catching distemper as an eight week-old puppy, from another rescue puppy that had not been vaccinated.

Most notably, Wild Thang has no teeth, meaning there is nothing to keep his tongue inside his mouth – a condition which numerous entrants also share.

Meanwhile, 12 year-old Monkey, a Blue Factor Brussels Griffon, took out third place. Despite her fluffy face, Monkey is large furless on her back and legs, having been rescued from hoarders at age one. 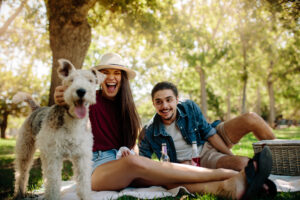